Porta Coeli or "Gateway to Heaven" Convent church, or El Convento de Santo Domingo de Porta Coeli in Spanish, is located in San German, Puerto Rico, and was built by the Dominican order in 1609, making it one of the oldest church structures in the western hemisphere.  I have never been to Puerto Rico, and have never heard of this church until now, but as a celebrant of the resurrection of Jesus Christ after his historical death on a cross more than two-thousand years ago, these words were given to me as I was driving to perform in a choir concert named "Journey to the Cross" https://www.twu.ca/academics/samc/events/2014-2015-events/spring-choir-concert.html. 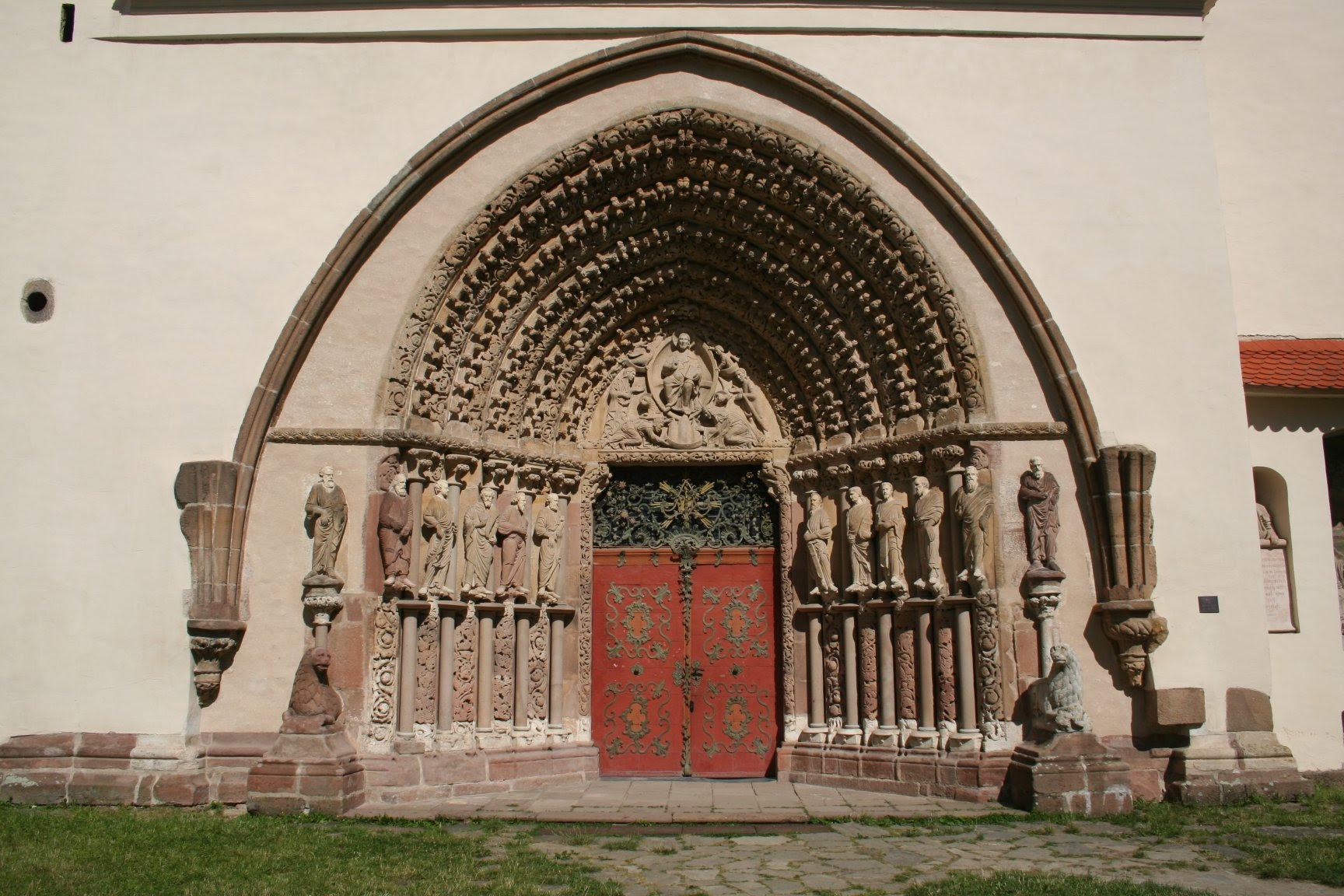 As a western Christian in the Reformed traditions, I have been seeking to help translate the intellectual and social problems people have with Christianity by integrating a scientific and universal understanding of truth with my worldview and personal faith journey.  In so doing, I have often been stretched to the breaking point, because of the lack of connectivity present in western culture between the empirical sciences and the realm of metaphysics, philosophy and religion. We claim tolerance and peace as a universal spirituality of oneness with the world of nature, but are intolerant of religion that presents dogmatic truth claims that can be proven and argued rationally.  It can be said that Christianity is the only falsifiable religion, because it is based on legal truth claims that can be proven or dis-proven in a court of law. From the perspective of legal apologetics, the four gospel witness accounts of the birth, life, death and resurrection of Jesus Christ are legal documents which should not be tampered with posthumously, as is often done by groups like the Jesus Seminar
http://en/wikipedia.org/wiki/Jesus_Seminar, http://www.westarinstitute.org/projects/the-jesus-seminar.

The post-modern west is going through a fragmentation of the internal structure and cohesiveness of how things fit together, not just organically or mystically, but in fact, history and conscience.  The latter must precede the former.  A once secular journalist, Lee Strobel, found this out when he researched the historical evidence for the resurrection of Jesus Christ, written in his book "The Case for Christ" http://www.amazon.com/The-Case-Christ-Journalists-Investigation/dp/0310339308

Because historical facts and eternal truths underlie mystical experience in the unseen realm of the mind and spirit, a cohesive worldview is possible that embraces all of human life, dying and experience as having ultimate purpose.  Universal truth is for all times places and peoples, and the gift here is this: it is both abstract in a paradigmatic sense, and concrete in a personal and relational way. If you take the abstract route of scientific investigation, you will ultimately come to see your universal theories as personifying the God of the universe.  As C.S. Lewis put it in the voice of one of his characters, Uncle Screwtape, who instructs his demon nephew Wormwood on how to distract and befuddle people,


"Keep pressing home on him the ordinariness of things [This can also be a recipe for boredom and hell].  Above all, do not attempt to use science (I mean the real sciences) as a defence against Chrsitianity.  They will positively encourage him to think about realities he can't touch and see.  There have been sad cases among the modern physicists.  If he must dabble in science, keep him on economics and sociology, but don't let him get away from the invaluable 'real life'.  But the best of all is to let him read no science but to give him a grand general idea that he knows it all and that everything he happens to have picked up in casual talk and reading is the 'results of modern investigation'" (Lewis, C.S. [1942].  The Screwtape Letters. New York, N.Y.: Harper Collins, p. 4).


Conversely, if one is on the relational route of believing God loves you in Jesus Christ, you will ultimately continue in relationship with Him and come to know more of His character and righteousness.  The gift of grace precedes knowing God within His boundaries, or laws.  Only a personal knowledge of God creates meaning and purpose for the laws we do observe in nature.  Here lies the power of the cross, the universal principle of death and resurrection personified and incarnated in the perfect Son of Man and Son of God, Jesus Christ.  He comes to each person as a gift, as each recognizes their ultimate unseen end without a Saviour, dies to it, and rises in hope with Him.

Jesus Christ is the historically evident, factual, actual, proven, universal Porta Coeli, the gateway into heaven.  It is a narrow way, but the only universal way. Universality comes at great cost in the unseen, the cost of death and the cost of the life of the Son of Man who defeated death by his perfect life and death, sufficient to save all people in His death and resurrection.  In Him, we receive fresh eyes to view the suffering of the world, death, sadness and the loss of life as ultimately fading and eternally untrue (Mike Hsui, Grace Vancouver Church lead pastor, March 5, 2015). All who have this hope purify themselves (I John 3:3) among other things, from a cynical heart committed to self-preservation that recoils from hope.  The God of the universe does really touch and heal our wounds, calling us out of easy despair, self-sufficiency, boredom and lethargy to hope in God and delight in His coming kingdom, when He will make all things new.


Posted by Angelina Van Dyke at 23:06 No comments:

Living and Learning from the Inside Out of the Outside In?

Living and Learning from the Inside Out or the Outside In?

Integrating one's internal world with the external world is the most comprehensive and difficult task of a mature and whole human being (Myers-Briggs Type Indicator, 1962).  Whereas the MBTI personality continuum divides the mind between thinking and feeling, sensing and intuition, perceiving and judging and introversion and extroversion, the goal of education and maturation is to integrate these polar opposites. Integrating the internal and external is difficult to teach, but once recognized, a student will find traction to advance further than he or she could have by expending efforts to change their external world without first listening to their souls. One could term this intrinsic motivation.

One example can be taken from the singing studio.  Jeanie Lovetri lists some core principles of her method, http://somaticvoicework.com/core-principles/   and one particularly stands out:

When a student can't sing something the problem lies with the instruction, not with the student or the student's ability.

According to Lovetri, it lies with the instructor to find what the student is capable of and build a bridge to extend that capacity, and thus create a pleasure for learning and an inner motivation to continue learning. This in itself is not revolutionary pedagogy, but consider this.  A young singer came to me with a recorded sample of a song she had sung at a peer sporting event.  Her sound was big, brassy and bold.  It was an impressive and mature sound for her age, with a chest register that belted up high.  She was externally motivated by the pop songs she had imbibed from the radio.  Recognizing her talent, I encouraged her to think of her voice within a larger culture of music appreciation that spans several centuries instead of just the present moment.  That motivated her to understand where I was asking her to journey.  After a few months of occasional lessons and public performance auditions that she had successfully completed, I began to ask Jill to listen to the inception of her sound with an inside ear and connect it to her breath.  The pure beauty  of her sound soared beyond imagination, and the shackles of tension fell from her vocal chords.  It reminded me that when one listens internally to one’s soul, the external world benefits, much like when you live for heaven, you receive heaven and earth.


Posted by Angelina Van Dyke at 23:49 No comments: